The past political primary season revealed a lot of ugly.   Name calling, backstabbing, lying and even stealing.

Worse, there is a significant segment of the Christian community that has an Old Testament worldview which confuses the crap out of most non-believers.  (And quite a few believers as well.)

How Many Christians Are Self-Righteous Rather than “Jesus Righteous?”

Barna Research did a scientific study on how many Christians actually exhibit the characteristics of Christ.  Are Christians more like the Pharisees of Jesus’ time who demanded a strict religious observance for everyone, or are they selfless in attitude and action?

via Barna Group – Knowledge to navigate a changing world

…over half of the nation’s Christians—using the broadest definition of those who call themselves Christians—qualify for this category (51%). They tend to have attitudes and actions that are characterized by self-righteousness.

On the other end of the spectrum, 14% of today’s self-identified Christians—just one out of every seven Christians—seem to represent the actions and attitudes Barna researchers found to be consistent with those of Jesus.

What is a Christian?

In fairness, ANYONE can call themselves a Christian.  That doesn’t necessarily mean that they even KNOW the teachings of Jesus or have asked Him to be the Lord of their life.  Some believe it’s an inherited club membership from their parents.  Others assume they are “Christians” because they go to church.

Jesus (and the apostles) were pretty clear that there is only ONE criteria to be a Christian and another criteria that would advertise it to the world.  In Romans 10:9 (New King James Version) it states:

9 that if you confess with your mouth the Lord Jesus and believe in your heart that God has raised Him from the dead, you will be saved. 10 For with the heart one believes unto righteousness, and with the mouth confession is made unto salvation.

It is no wonder those who tried to be “perfect” (and scolded others to do the same) were incensed that Jesus undercut their entire goody two shoes scheme.  All you have to do is trust that Jesus is real and say it?  You don’t have to go to church? You don’t have to fast or pray every day?  Jesus didn’t even say that you had to “repent” as shown in his inclusion of the woman caught in adultery and the thief next to him on the cross.

You are “GOOD” to God by Trusting on Jesus, Not by “Not Sinning”

This concept – that you become “righteous” through what Jesus did in being perfect – NOT through your own good works – is reiterated in Romans 3:21-24

21 But now God’s righteousness has been revealed apart from the Law, which is confirmed by the Law and the Prophets. 22 God’s righteousness comes through the faithfulness of Jesus Christ for all who have faith in him. There’s no distinction. 23 All have sinned and fall short of God’s glory, 24 but all are treated as righteous freely by his grace because of a ransom that was paid by Christ Jesus.

I had been a Christian nearly 30 years before I realized that this is EXACTLY what God wrote about in Genesis in the story of Adam and Eve.  God FORBADE man to eat of the tree of the knowledge of good and evil.  But what does most of Christianity do today?  It tries force feed everyone – Christians and non-Chrisitans – the “knowledge” of what is right and wrong.  What is good and evil.

The tree God DID want them to eat freely of was the Tree of Life.  This is why Jesus said that HE was the way – the truth and the Life.  When we nourish ourselves in the FACT that He was perfect so we don’t have to be – it not only takes off a lot of pressure – it makes us love Him more!

Yet today, many Christians only want to talk about the sins of their targeted group or try to get the government to force another group from sinning.  The problem is that while laws are necessary – it confuses Christians AND non-Christians into thinking that “not sinning” is equivalent to being acceptable to God.

You may be acceptable to society (or some segments of it), but God says that even if you are Mother Theresa or Billy Graham even your BEST effort is like a Kotex.  (Seriously – that is what the original language says.)

You Can’t Blame Non-Believers For Confusing Christians and Muslims

Unfortunately this notion – focusing on what is sin rather than power of Jesus – has spread to the political movements and Christian circles.  They focus on one sin they don’t like (like homosexuality) and exalt it as being more serious than fornication (or one that they don’t think they are guilty of).  Jesus said if you even THINK about lust during a Victoria’s Secret commercial – it is the same as doing it.

Why aren’t they equally incensed at at pride?  Or gossiping?  Or even believing in God!  The bible actually says that the first people (who haven’t accepted Jesus by faith) that are thrown into hell are the “cowardly” and the “unbelieving.”

There is no winning that battle.   No one can ever earn righteousness no matter how much they “act good” or talk a good game.  And why the idea that Jesus paid for ALL of our sin – even the sins we are going to commit – is so radical and powerful.  it takes the power to accomplish it out of our hand.

The religion that DOES require complete chastity and rules to get into heaven?  Islam.

And it’s shocking that so many Christians are passing up the opportunity to radically save billions of people by telling them that yes, society may make a law against your sin that hurts other people (like stealing), but that they and God will completely accept you as “good” if you trust in what Jesus did and say so.  They are passing up their OWN chance at freedom on earth, by getting caught up into “right” and “wrong” rather than simply living by the prompting of the Holy Spirit within them.  This is why Paul said that the “law” (of right and wrong) always ends in death.  But focusing on how good Jesus was, and that He took the punishment for everything from that glance at porno to much, much worse in your place.

If Christians truly quit condemning everyone they disagreed with, and started loving them – the church would explode with people RUNNING to God get in on the free gift of righteousness to take their own guilt and shame ankle weights off.

What the World Really Sees in Our “Christian” Life.

In another survey by Barna, 85% of millennials knew a Christian personally.  But less than 15% saw anything appealing in the way they lived their life or conducted themselves.  Christians had better quit denying the reality that most non-religious people identify Christians as being hypocritical, self-righteous meanies.  We Christians spend more time telling everyone what they are doing wrong instead of doing what Jesus asked us to do – telling them that HE did everything right for them.

This brings us to the only criteria the Bible gives for HOW be will recognize REAL Christianity.

This is how everyone will know that you are my disciples,
when you love each other.”

Should Christians let people “get away” with sin?

Again, Jesus and the Bible couldn’t be clearer.  As many as are “led by the Spirit” are sons and daughters of God.  NOT how many know every sin and refrain from it.   When the Holy Spirit comes into the Christian’s life, the “right” and “wrong” are prompted from within by the Spirit. Hebrews 10:16-25 actually recites how this works from those prophets mentioned earlier in Jeremiah 31.

This is the covenant that I will make with them.
After these days, says the Lord,
I will place my laws in their hearts
and write them on their minds.
17
And I won’t remember their sins
and their lawless behavior anymore.[a]

And the REAL Christians instinctively KNOW what is right and wrong and are “led” by that Spirit.  So if you’re heart doesn’t feel like it’s in a cobbler’s vice when you are thinking of eating a second piece of double fudge chocolate cake, you eat it in freedom without feeling you are doing something wrong.  Similarly, if you suddenly are compelled to give away the $50 in your wallet to the weird guy at Starbucks, you give it – not worrying if you were going to need that cash for garage sale you were headed to.   And if you miss it, and screw up – you know that God doesn’t judge you by these things anymore because when He looks at you – He sees his Son Jesus who was perfect – and GAVE YOU that same “perfectness” as a gift for just believing in Him.   Leaning and relying on the fact that He was perfect so you no longer have to fret about every decision.

You can see how radical of an idea this is.  You can see why the Pharisees wanted Jesus killed – letting all the riff raff off the hook without as much as feeling guilty for their imperfection.

What Jesus knew is that that freedom – drew people to Him.  He was approachable.  And they would be even MORE loyal, obedient and loving to Him because they understood they didn’t deserve it.

And it’s why the “drunks” and “gluttons” (the partying people of the day) loved Him but the religious people did not.

Could you imagine how different the world would think about Christianity if they saw Christians spreading THIS good news? 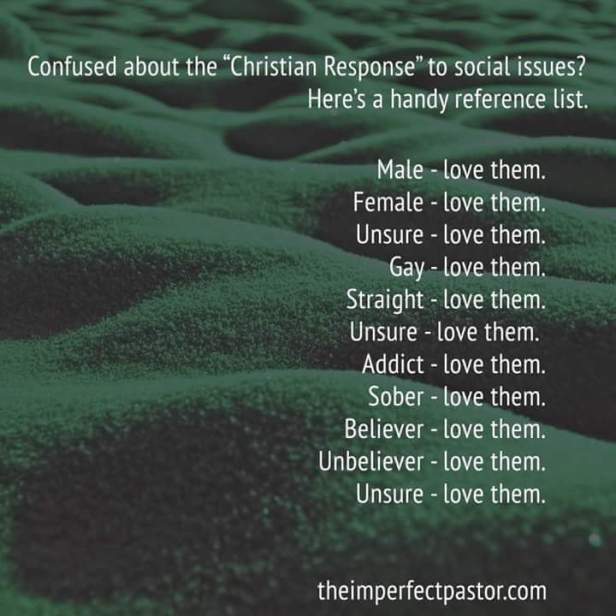