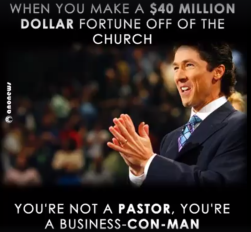 A friend posted the adjacent picture saying Joel Osteen is a “con man” and I finally decided to write a post addressing all of these issues once and for all.  Periodically over the past few years I’ve exhausted myself by cataloging many of the points below in comment section after comment section trying to set the record straight.  And keep those are interested in truth from making mistakes that would embarrass them.   Those looking for evidence of his preaching heresy should click here. Here goes:

I attend Lakewood Church. The notion that Joel Osteen either got rich from his position as Pastor of the church or that he is fleecing his flock is factually wrong.   And abhorrent.  It’s also a false accusation, which you may recall is a sin in the bible.

The recent Hurricane Harvey #fakenews again made the insinuation that Joel is a huckster who lives in a multi-million home and won’t give any of it back to the community.  That’s not just a lie, it’s an insult to the tens of thousands of us who worship and volunteer there.  It finally took leaders and celebrities from Max Lucado and Tony Perkins to Tyler Perry and American Idol Danny Gokey to help and set the record straight.  Of course the media never mentions the work for the poor done weekly not only around the world but directly in Houston including rebuilding a PUBLIC SCHOOL that couldn’t get public funds to renovate it.  You want to know what local pastors – far smaller than Lakewood and local radio show hosts have to say about what the Osteens from Hurricane Ike to Harvey?  Watch these videos.

First, Joel barely made between $35K and $50K a year as the head of media for his father’s church for nearly 20 years.  The church struggled for most of it’s early years, and suddenly exploded in the early 80’s needing a larger facility to accommodate the enormous growth for people to worship, learn how to be better fathers, mothers, employees and citizens and to also serve in multiple outreaches to the poor.  At least 3 times the church took their entire building fund (one I believe was hundreds of thousands of dollars) and gave it to needy churches, one of which was one burnt to the ground without insurance foregoing their own building plans to help others.

Early in their marriage, Joel and Victoria were directed by the Holy Spirit to buy depressed land (they didn’t even really want) to build their home, and were stunned when – due to nearby development – they were able to subdivide and sell the extraneous property multiple times the value of the original purchase.  Years later, Joel was able to invest that with friends to buy a TV station that was eventually sold to one of the major media conglomerates for enormous profits.  Joel Osteen became one of the largest donors to the church and turned down opportunities to go into for-profit positions for himself, believing God was blessing him to be able to help the church and his father.

When John Osteen died, multiple family members believed God was directing Joel to take over as pastor, DESPITE NEVER HAVING GIVEN A SERMON IN HIS LIFE and him having NO desire to speak publicly.  Many wealthy donors threatened (and left) Lakewood when they learned “unprepared” Joel was going to take over for his father.  Joel agreed to do it “on faith” and the family decided they would obey God rather than bow to fear and threats over money, although they truly were in fear the church might go under.  No one was more shocked that his style not only increased the attendance of the church services, but was much better suited to reach the current media minded generation.   Pastor Phil Muncey – who left his own ministry to join Lakewood, wrote a Charisma News article in 2014 to set much of the controversies about Joel Osteen to bed:  He wrote in part of it’s success from about 3,000 to 5,000 members to today’s impact:

(Lakewood is) where some 45,000 people attend weekly at one location. 50,000 people receive a new believers book at the altar calls each year in the Lakewood services. 6,000 volunteers are trained in Christ-centered ministries makes the 53-year-old Lakewood Church one of the healthiest churches in the country.

Joel touches 40 million people monthly through television and other media. His books have impacted over 30 million people and counting, including 5 New York Times best-sellers.

Joel is not a televangelist. His dedication as a pastor is reflected in this interesting fact. In the past 14 years, Joel has missed an average of just two weekend services a year. Even though Joel speaks at 38 of those weekends services annually, you’ll still find him sitting on the front row (including Wednesday nights) when not speaking, faithfully serving his flock and being a humble example (including shaking hands with the guests and new converts for one hour between services).

Joel and Victoria and Lakewood Church are ambassadors of the gospel—the hope of Christ. Since 2004, Joel and Victoria have held over 130 live “Night of Hope” events around the country and overseas. These monthly events have brought over 1 million people to a public confession of their sins and Christ as Lord!

Each month, Joel’s family and the Lakewood team hit city after city with the message of hope. Joel’s 16-hour nonstop Friday begins with meetings with local pastors, media interviews, then time preparing for the event. Joel and Victoria exhort and preach the majority 3-hour event, which ends with 30 to 50 percent of the mostly unbelieving and unchurched attendees standing and confessing their sins and Christ as Savior.

This was in 2014 and these numbers were extremely conservative to begin with.  Joel and Victoria regularly fill 20,000 to 50,000 seat auditoriums every month where as many as half dedicate or rededicate their lives to Jesus.  Lakewood helps these people to become planted in LOCAL CHURCHES – telling them that is where they should invest themselves, not in Joel’s national ministry. He likely has already surpassed Billy Graham’s crusade totals of 3.3 million lives changed for the good.

And yes.  It costs an enormous amount of money to reach these people through the monthly crusades, TV, radio and print publications while regularly paying for hospitals and medical outreaches in America and overseas.   Joel’s brother (medical) Dr. Paul Osteen annually leaves his family for months at a time to run an African hospital and orphanage and Lakewood members regularly conduct outreaches in Houston and elsewhere building homes, schools and churches.

Every week I attend Lakewood, within no more than a few seats, I sit with people who even from their physical appearance – clearly have been saved from even the most dire and despicable circumstances.  I’m amazed at how many of these people freely talk about how they escaped drugs, suicide, poverty or hopelessness and now have fulfilling lives – even while continuing to struggle through life as we all do.  I can’t imagine how many who can hide gang tattoos or play the part of well adjusted human like I do – are similarly encouraged, motivated and helped by his ministry.

Even decades after Billy Grahams public appearances, the Billy Graham Association generates revenues of over a hundred million dollars a year.   No one questions the good Billy Graham has done in encouraging and educating people to become better humans to their society by serving Jesus even though that (good) organization isn’t nearly as effective in today’s culture.

Through 2012, How Much Money Do They Make reports:

As senior pastor, Osteen draws no salary from the church, which has an annual budget of $70 million. Instead, he relies on income from his flourishing book sales the most recent of which is I Declare: 31 Promises to Speak Over Your Life. Much of the content for his best sellers come from sermons he has preached at Lakewood. His book sales and related material brings in a reported $55 million. Joel has received as much as $13 million as advances on some of his books.

From his Amazon profile:

So his FIRST book sold over 4 million copies and he’s had about a dozen books since.  It doesn’t take a forensic accountant to determine where his money is coming from, especially when the churches finances are published openly (showing no salary or renumeration) and the board is held accountable according to standards THEY AREN’T EVEN REQUIRED TO.

Watch how the writer from Texas Monthly (2005) described his interaction with Joel Osteen on the subject of finances, AND JOEL’S IMMEDIATE RESPONSE.

Inevitably, some wonder about the wisdom of having a small family group exercise almost total control, with little outside accountability, over more than $60 million in annual revenue, a figure almost certain to grow in future years. When I spoke with Joel about the financial scandals that have bedeviled some independent ministries, he revealed that the church did not currently make its budget available to the congregation but that the executive team had been discussing the need to do so. I noted that Billy Graham and other ministries associated with the Evangelical Council for Financial Accountability had been able to deflect much criticism””and, in the process, erect a barrier against temptation””by providing an audited financial statement to supporters. As a family ministry, Lakewood cannot belong to the ECFA, nor is it required to submit 990 forms to the IRS listing income and major expenses, including the salaries of its five highest-paid officials. Joel recognized, however, that nothing was stopping the church from doing this on a voluntary basis. Later that week, I learned that on the day following our conversation, he had spoken to Iloff about the need to provide a more complete picture of the church´s finances, “œlike Billy Graham does.” A few days later, I received audited financial statements for the two previous fiscal years.

“œWe don´t set our own salaries,” Lisa pointed out. “œAn outside group approves compensation.” (In addition to contributing a substantial portion of his earnings from the book to the church, Joel has stopped taking his $200,000 salary.) And Dodie stressed that she had always told the children, “œDaddy´s name was always squeaky clean, and we intend to keep it that way.” She seemed to feel this had been sufficient, observing, “œThey are so respectful of their father and of me. You don´t hear much criticism about Lakewood Church or about the Osteen family.”

It is grotesque (in my humble opinion) for anyone – much less other Christians – to take the spirit of Judas (who complained about perfume being lavished on Jesus instead of being sold to feed the poor), and accuse Joel Osteen of any financial greed or impropriety when it is an overt demonstration of God’s grace and mercy on his life.

And in case you thought God has nothing to do with Joel and his church and doesn’t operate there – think again:

READ Also: If You Attack Osteen’s Theology, You Are Attacking Billy and Franklin Graham.

3 thoughts on “No. Joel Osteen Didn’t Get Rich from Lakewood”