To read my Facebook timeline Bitcoin is either the current equivalent of the Pokemon fad or the investment that Jesus would use of He were still on Earth as a man.

Let’s get a little perspective here.

Bitcoin is NOT a company, a security or an “investment”. It is literally a currency (the 6th largest in circulation in the world btw) that is electronically capped at 21 million bitcoins.  It is far less risky than other national fiat currency like Venezuela’s or Greece’s (the Euro has collapsed in the past 5 years because of it) and it’s value is simply reflecting the increase number of holders of the currency.  (Iraqi dinar was very much sold on a scam although it is a real currency.)

There are now enough people using it as a medium of exchange that it has a very high likelihood (not financial advice on my part btw) that it will always hold some store of value.  But it already passed the level of “proof of concept” in 2013-2014 going through a serious “bubble” and test on it’s technical proficiencies.  It now has the undergirding of established systems and users to take it to a broader level as the world population is slowly exposed to it.  And Bitcoin is only the tip of iceberg as other cryptocurrencies like Ethereum are being established to create a whole new level of use beyond speculation.

There will be multiple “bubbles” just as there have been in the housing market, the precious metal market and even the internet. But passing through a bubble doesn’t eliminate REAL value that a core group recognizes.  Pokemon cards were a fad and disappeared when the number of new collectors were exhausted.  But while MySpace disappeared the concept of social media didn’t, in fact it expanded.  Blockchain technology is already to enmeshed into the world’s method of operating and has too many advantages to go away.  Bitcoin may end up being “Kleenex” or MySpace, but digital currency is already a “thing” with ATM’s, PayPal and Zelle. You just happen to calculate all those in dollars that continually lose value as DC “prints” more of it.

Is it a “bubble?”  No more than any new technology standard that reaches plateaus of new users. If no more new users embrace it, it will stabilize but continue to be an excellent gauge against inflation of ALL currencies if it continues to be a medium of exchange. Hundreds of thousands of programmers make their living in the blockchain technology sector.  It’s NOT likely to just go away.

If it continues to make inroads like PayPal has (how many of you were reluctant to use it over your credit card for months or years until you trusted it?), it will continue to expand around the world as a currency of exchange.

If that happens, the (newly minted) Winkelvoss billionaires prediction of a single Bitcoin being worth $142,000 will likely be low. In 2013, they predicted or would reach $40,000 and that no longer seems as ridiculous as it did when it was $200.

Bitcoin is now the SIXTH LARGEST currency in circulation. These two articles may be interesting to those truly trying to find FACTUAL basis upon which to make their opinion. First is the application of Metcalf’s law.  From a ZeroHedge article:

Metcalfe’s Law states that a network’s value is proportional to the square of the number of users. For instance, it’s obvious that if you’re the only person with a telephone then that network would have no value, when one additional person gets a phone the network has achieved a tiny bit of value, and if virtually everyone has a phone, then the network becomes extremely valuable. This relationship has been observed in many industries where increased adoption boosts the network’s overall usefulness, such as European internet usage, Facebook’s value, and more recently Tencent’s value.

As you see from the chart below, blockchains like Bitcoin (proven to have a high correlation to Metcalf’s Law) show that there is growth as it is adopted by a USEFUL tool to A) store value, B) serve the medium of exchange of a transaction or both.  With a base of millions of holders and as an accepted form of payment from coffee houses in Seattle to the largest gold exchange in the world – Bitcoin already has an established basis to continue even without new users. 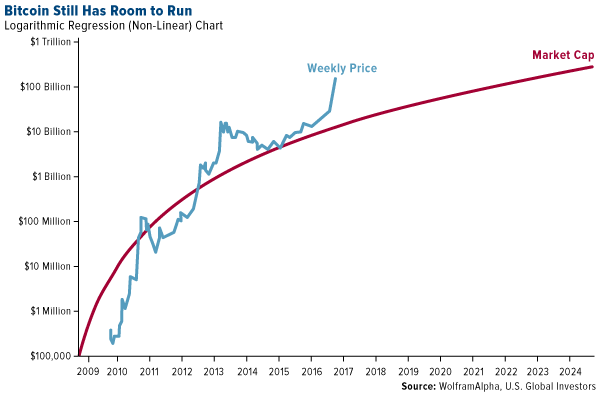 Given this information, what can Bitcoin’s network size tell us about its value and the size of the current bubble? Utilizing Alabi’s method we can arrive at Bitcoin’s Metcalfe Value through time and compare historic Price-to-Metcalfe Value ratios for Bitcoin.

This is somewhat analogous to price-to-book ratio in public equity analysis in that a higher ratio implies investors expect a given network to create more value from a given number of users. 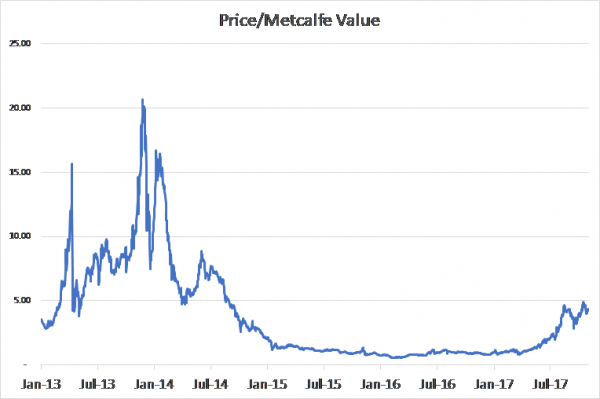 The video below – WHAT BACKS BITCOIN – further explains why Bitcoin (or cryptocurrencies in general) will not likely go away.  As the narrator states – ANYTHING that either holds value, is a medium of transaction exchange or both IS a currency. What determines it’s viability is NOT what backs it – but how many people have the faith in it to act as a value exchange. You don’t need Everyone to accept it nor every good to be exchanged for it. Gold is a great store of value but good luck trying to check out of Kroger’s with a Krugerrand.
Advertisement