A beautiful, wonderful friend of mine – who happens to be black – posted a response to the Anthem protest issue because many had asked her to.  I’ve posted her original response at the bottom of this article, but her point was essentially that there is still great racism in America (you white people don’t understand) and that it is just a peaceful protest against racism.   She wants to know our thoughts and this was my response:

Thanks for asking ______.
Kaepernick originally took a knee last Sept (2016) following declaring that “I am not going to stand up to show pride in a flag for a country that oppresses black people and people of color,” in response to the police shootings of Alton Sterling in Baton Rouge, and Philando Castile in MN.  He also proceeded to wear socks advocating the KILLING of police officers despite the fact both of these men were wanted felons, both were armed and dangerous (Castille was actually pulling a gun we now know from video) and Castille’s shooter wasn’t even white.
The WORST part for many of us is that the entire notion that black people are more at risk from police shootings is a false narrative. According to a (black) Harvard professor – blacks are actually SAFER from cop shootings than whites according to FBI statistics. (http://www.nber.org/papers/w22399) In fact, whites in general are far more likely to be victims from violent crime by blacks. THE ENTIRE ARGUMENT THAT THERE IS SYSTEMATIC RACISM IN POLICE SHOOTINGS IS FALSE. And many liberal instigators like George Soros (banned in 3 countries for intentionally creating unrest) sunk over $60 million into Ferguson before ANY facts of the case were even known.
What (then) inflamed the situation for MOST Americans, was when BLM member Micah Xavier Johnson ambushed and fired upon a group of police officers in Dallas, Texas, killing five officers and injuring nine others. He EXPLICITLY said he wanted to “kill white people.” NONE of those that were still pushing the BLM narrative barely covered THAT racism – or protested the NFL WHEN THEY REFUSED THE DALLAS COWBOYS PERMISSION to wear commemorative patches and shoes in honor of the fallen policemen – who, unlike Kaepernick’s protest red herring – WAS ACTUALLY BECAUSE OF RACE.
500 people were injured in Las Vegas and we all “pray for Las Vegas” and adopted #hastag virtue signaling. How about the outcry for the 500 blacks killed in Chicago this year as a result of black on black crime? Under one of the most restrictive gun control policies in the United States?
You can see why many are frustrated that the NFL – which we pay for in tickets, merchandise and advertising – feel incensed that instead of doing the job to entertain us – they push a false narrative that does NOTHING to actually bring people together. They “declare” America to be racist when it was 360,000 white Americans that gave up their life to end slavery.
Ironically – these millionaire NFL players are not just (ignorantly imho) protesting facts that aren’t even true, they are doing it WHILE BEING EMPLOYED – not on their own time. How many of us can get away “expressing” our views that offend our employers customers while being paid millions without getting fired?
TD Jakes, Johnny Enlow were two Christian leaders who fell into this brainwashing by mainstream media. (The entire facts of the BLM cases – including those that DO have merit of white cops who might have wrongly shot black victims – is here)
Respect for the anthem is required by the NFL Operations Guide.  The whole idea of playing our national anthem before sporting events began in baseball right after the civil war.  It was the ONE THING everyone could agree on to unite us as a country.  The idea of kneeling – and NOT being unified with other Americans – is literally a sign of segregation.
What’s so special about about the anthem?  It is DIRECTLY a result of the spirit of this country, crying out to God against oppression and giving our very lives to refuse to capitulate to tyranny or fascism.  Watch this 10 minute explanation if you aren’t aware of the men, women and children the anthem about our flag commemorates in song:
As importantly – the entire concept of playing our national anthem before sporting events WAS TO UNITE THE COUNTRY after the civil war – being adopted regularly by by professional baseball in 1918.  It was to come together as one to HONOR OUR FLAG ABOVE RACE.  But players like Kaepernick are now attempting to divide the country instead.  It certainly did so at the first New York Yankee game following 9/11.
The last poll I saw that 64% believe Colin Kaepernick has a right to kneel if he wants – and, as long as his employer allows him to do so – you can count me in that crowd.  Among veterans, 62% agree with the right of players to respectfully protest but 40% will no longer watch NFL games.
It’s amazing how many then are appalled at the right of others of us to protest what he claims to be standing (or kneeling for) – especially when it involves the killing of innocent cops of all colors. 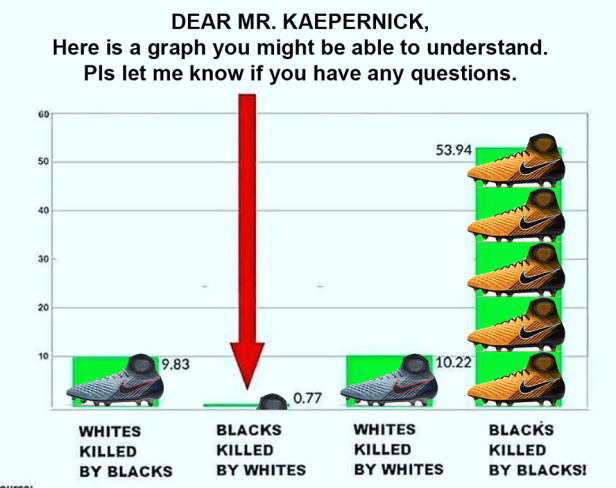 __________________________________________________________
Original Post:
I am going to share my feelings with my Christian friends about this NFL kneeling issue…
1. When did kneeling become disrespectful?
2. Jesus died for us, but does not even demand that we follow Him. We have a choice.
3. The heartbreaking issue here is we have become a house divided with no desire to understand one another. Colin Kaepernick had a conversation with an army ranger teammate to learn that sitting would be disrespectful, but kneeling would be a respectful means of protest.
At the core of this issue is race. It is easy to judge someone when you have not walked a mile in their shoes. I remember the episode of Touched by an Angel when Monica became black and found herself crying out for God to make her white again.
I reached out to my cousin who is currently in Afghanistan, my brother an Air Force veteran, my uncle an army paratrooper who served in the Vietnam war, cousin who flew the recon mission to retrieve the Iran hostages, a retired Lt. Maj… to get their opinions. No one I spoke to takes offense with kneeling. They feel it is time for the race conversation to happen. They can go to war and die for this country, but are racially profiled and disrespected daily.
I am sorry the rhetoric has become so divisive. I have a friend who commented, I never understood what the big deal was until I adopted a black boy. In daycare, I observed one teacher give him a piece of candy and another teacher accuse him of lying and stealing… why? He is now in high school, and has experienced many instances of prejudice.
We don’t even realize that we have subconscious racial narratives going through our minds nonstop that impact our decisions. I pray, as Christians, we will find a place of unity and you will be able to watch the NFL with a new level of understanding.

In retrospect I would have also liked to add that, although white, I had been married to a black woman for 10 years.  I experienced similar “racism” by others of her race toward me, but also saw racism directed at her I otherwise might not have been exposed to.

But why is this always about race?  Do you not think short people aren’t discriminated against?  Or socially inept people?  Or arrogant and prideful people? Or plain or ugly people?  Or blonde women?  Or hedonists who despise people of faith?   Or those (like me) who didn’t finish college?  You will ALWAYS find a group that looks down on you.  I have 2 billionaire acquaintances.  Both are aware that every person they meet wants something from them, and assumes they don’t just need normal friendship without always being on guard someone is going to try to use them.

Since when did assume that racism or sexism was somehow more “special” than any other slight that comes from ignorant or fearful people against ANY other “group.”

And since when did continually magnifying racial differences EVER bring us together?   If I recall correctly, Martin Luther King had a dream where PEOPLE (optimally) DIDN’T SEE COLOR – but saw the content of their character.   Falsely accusing whites of being racist 24/7 isn’t helping that by the way.

People are both idiots and wonderful.  Racism (or sexism, or ageism, or educational condescension) won’t ever be solved by screaming about it and always playing the victim – whether warranted or not.  Jesus said to “love one another” and (finally) redirected people from always judging each other by outward appearances.

I’m not very good at it, but the goal is to practice loving those who are unlovable (or idiots) when they don’t deserve it.  That doesn’t mean accepting their ignorance, nor not taking steps to protect yourself from it.   But it does mean having a focus and common goal on being unified rather than continually complaining about what each other is doing wrong.